As a still-fairly-raw newbie to the field of geology, my sphere of connections within that field is limited to the people in the department at UCR and to the geoblogosphere. (The latter of course, means that my sphere of connections is growing quite quickly! But in terms of the whole discipline, I assume that's still a fairly small group.) Being new to the field formally, however, does not mean I haven't used geo-geekery to connect to things that are not specifically scientific!

Remember my post from the Accretionary Wedge about geology movies? If not, it may be a bit TL;DR, so in summary: there is a movie coming out in 2009 or 2010 called 1906, and it is indeed about the earthquake and fire. The book upon which the movie is based is kind of dreadful, since all the characters are too perfect and don't act like normal human beings, and since it refers to the San Andreas Fault by name and talks about plate tectonics in 1906. The good news is that Brad Bird, of The Incredibles and Ratatouille fame is writing the screenplay and directing the film, and Pixar is doing the special effects. This means the movie will look awesome, and the characters will be reshaped into believable, realistic, empathetic, and flawed humans rather than turn-of-the-century Perfectionbots. I was, however, worried that things like the two-years-too-anachronistic SAF references might slip by.

I mentioned worrying about it in that post from March, and then I kept thinking about it for a couple of days after writing that post. After thinking about it, compelled by geekery, I decided to try and make a connection for which I thought I must be crazy. Yes, I wrote a letter to Brad Bird.

I left out the part about the Perfectionbots, since they are not his fault and I'm sure he's fixing them. As I said before - and as I said in the letter - he can make talking rats completely credible and believable! Humans in crisis should be a piece of cake. I focused on the purely geological- the San Andreas and the tectonics, devoting a paragraph to each. I also apologized profusely in advance if I came across as an "insufferable know-it-all/geek" in the letter, and if the production team already knew all of that stuff.

A bunch of time passed. When I got back from the east coast in mid July, my apartment manager handed me an envelope she said had been sitting in the office since June and she'd kept forgetting to give to me. The return address was for Pixar

Yes, Brad Bird wrote back!
And it's not just a, "Thank you for sending fanmail LOL" kind of letter. It is three paragraphs long, mentions specific things in my letter, and is very gracious and friendly in tone. I also got the impression, though I could easily be wrong, that they didn't necessarily already know the things I mentioned.
Take a look: 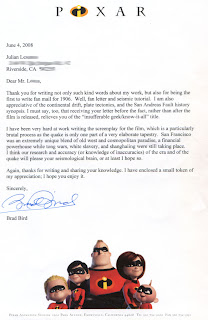 First fanmail for 1906! And he even quoted me on "insufferable know-it-all/geek." I was pretty much glowing when I received this letter. The "token" mentioned at the end was two signed prints: one of a scene from Ratatouille and one of a "family picture" of The Incredibles.

So being a geology geek can, apparently, be enough to make a connection - no matter how brief - with one of today's biggest names in movies. This is only made more exciting when that brief connection reveals that the big name in question is not only brilliant at what he does, but awesome and considerate enough to keep in touch with his fans and write personal responses...and to put up with nerds such as myself. I'm already planning to write another letter once I've seen 1906, and I will be very surprised if I cannot say I was as pleased as he'd hoped.
Posted by Julian at 10:14 PM

OMG!
He actually wrote back to you????
Wow, thats like incredible and awesome and kewl ll at the same time. Liked the part about "insufferarable geek/ know it all". Funny...

Julian
I'm a graduate student in earthquake physics, with the odd distinction of also having been a music grad student.