Not Easy Being Green

My internet connection was on the fritz all day yesterday, so I missed the best timing for posting a mysterious green deskcrop of my own. I'm still going to post it, though, since I'm not even entirely sure what it is. There was plenty of this stuff around at Dana Point Harbor, where my mineralogy class went for a field trip on 1 March. Even the professor wasn't sure what it was, so we collected some of it (and I very nearly spoiled the sample with blood after slicing my thumb on my knife trying to extract some of the green stuff) for analysis. I ran XRD on it, and one of my classmates put it under SEM...and we came up with completely unrelated results. My guess is the problem might have been in the preparation of the thin section for SEM, since this stuff has a hardness of less than two and powders so easily that I'm sure getting a clean even slice would be really difficult. We're going to put the powder we prepared for XRD into SEM after spring break, in hopes of clearing this up. But in the spirit of geopuzzles, I am consulting you guys, too! I'll let you know if your guess is what I came up with in XRD, or what my classmate came up with in SEM, though neither one is confirmed. I don't have any prizes to give, though I guess I could draw a silly picture for someone if they get it, or have a compelling argument for something other than what we tested. 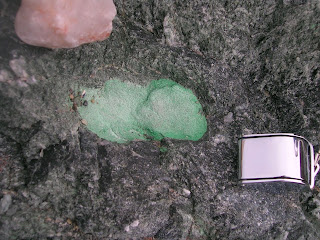 There were a bunch of places where the mysterious soft green stuff appeared to form puddles in larger rocks. 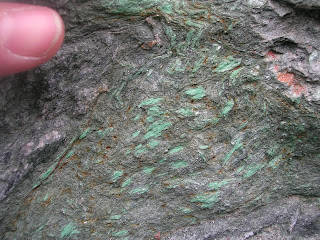 In other places, the mysterious green mineral clearly followed the foliation of the rock; this was further supported when I was drilling out the green for the XRD sample - the drill bit went very deep into a tiny surface spot of material, but was still churning out green.

In terms of environment, Dana Point, in Orange County, is dominated by the San Onofre Breccia, which consists mainly of blueschists, with some greenschists and amphibolites, in a red clay matrix. Many of the rocks there show signs of being kicked back and forth between brittle and ductile parts of the subduction zone. I'll put a bunch more photos in the next post.
Posted by Julian at 11:12 AM

Green and a hardness of 2? I'm going for chlorite. I have seen talc and nontronite look light green, but chlorite is the only clay I have seen as that color green. If the grains are clay sized but of mixed compositions, the EDX elemetal analysis will be from multiple grains because it has a larger excitation volume. I'd put my money on the XRD results being correct (only if the green mineral is the dominant phase in the XRD sample). If there is a peak at 14 and 7 angstroms (that 6 and 12 degrees 2Theta) then I'd say chlorite. It's possible to get a combo of minerals with the 14 and 7 peaks, but with that color...
Unless, it is another green mineral that has been "pulverized" by the deformation you were mentioning, then its a whole new ballgame.

Chlorite was one of the guesses that my classmate and I had before running any tests, but it was ruled out by both XRD and SEM. The main peaks were at 9.9585, 4.972, 3.3145, and 1.9886 angstroms.
I personally wouldn't be surprised if pulverization was a factor in the way this green stuff is aggregated.

The second photo looks like a photo of mariposite schist, but the first photo makes the mineral look more massive. I think - (unless it is a fine-grained Cr or Fe mica like mariposite, fuchsite, we ruled out celadonite) - maybe it could be one of the serpentine minerals.

I've seen a very fine grained tectonic mixture of talc/actinolite from blackwall reaction zones of blueschist boulders in serpentinite matrix melange from Ring Mountain in Marin Co - could be something similar that would be pretty low viscosity compared with the schists during that folding?

Fuchsite is indeed what I came up with for the mystery specimen after running XRD! But then the guy running SEM found no chromium...I'm really anxious to put the powdered stuff under SEM to see if it's different than his thin section.

This stuff is definitely fine-grained in all the places we found it on the outcrop - that first photo just had a bunch of it jammed into a larger space. Even a fingernail scratch disturbed it into powder.

Julian
I'm a graduate student in earthquake physics, with the odd distinction of also having been a music grad student.